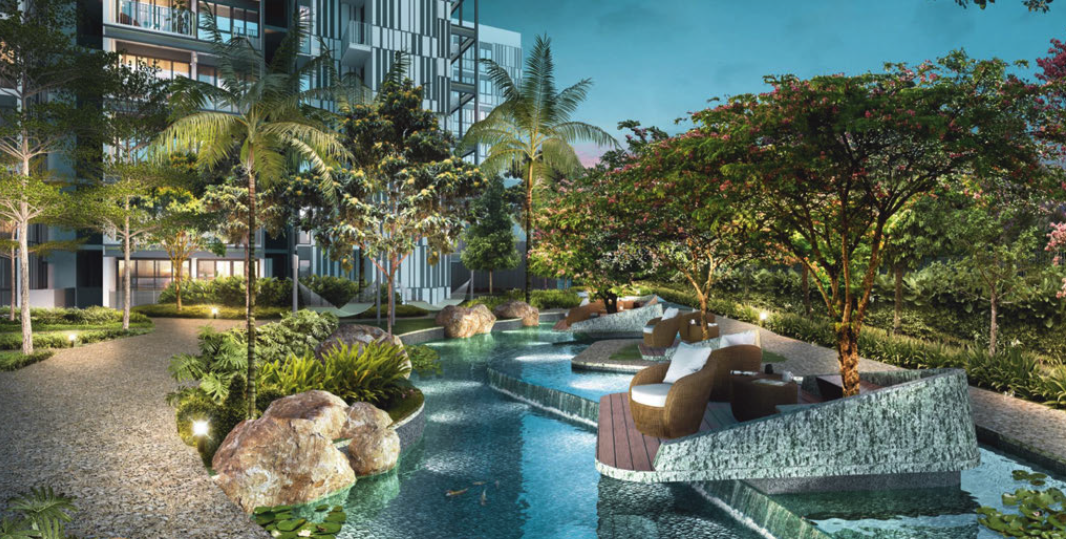 The Jovell, a 428-unit new launch along Flora Drive, will open its showflat for preview this coming Saturday, 15 Sep 2018, the same preview day of Mayfair Gardens and Jui Residences. A week ago, Qingjian Realty’s JadeScape had also started its preview.

The company has built several private housing developments in the Upper Changi Road North area, including Ferraria Park and The Inflora. At the moment, CDL also has a nearby new launch in that area called The Tapestry, which is situated along Tampines Ave 10.

The Jovell is the latest development and will sit on a 242,558 sq ft site that will comprise nine eight-storey blocks of one- to four-bedroom apartments.

The island resort-themed condo will feature a continuous 200-metre long waterscape with a rope island and pool island that incorporate a rope bridge, Jacuzzis, lounge pavilions and sun decks.

Situated near the new Tampines East MRT station, the development will also be close to numerous schools and retail outlets such as the Japanese School, Temasek Polytechnic, Tampines Mall and Jewel Changi Airport.

“The picturesque location and our competitive pricing have afforded us a series of successful developments in this area that have proved popular with HDB upgraders and Gen Y home buyers. Similar to our previous projects, we believe that same factors will remain appealing to all homeowners,” said Betsy Chng, head of sales and marketing at Hong Leong Holdings.

Bookings for The Jovell will start on 29 September when the project is officially launched. The development is expected to be completed in 2023. The Jovell Showflat is situated next to actual site.