NewLaunchOnline.com.sg
Facebook
Twitter
Google+
Pinterest
WhatsApp
Recently, the tenders for three government land sale (GLS) site tenders closed on Sept 4. This was the first batched closing of GLS sites after the latest round of property cooling measures were announced on 5th July 2018, our 9th cooling measure.
Two of the sites were from URA’s Government Land Sales Programme, namely the Dairy Farm Road residential site with commercial use on the first storey; the non-landed residential site on Jalan Jurong Kechil; and the executive condo (EC) site at Canberra Link in Sembawang, which is situated near to Parc Life EC.
Bidding activity was more on a cautious approach as indicated by the number of bidders and their bid prices, notes Desmond Sim, CBRE executive director of research for Singapore and Southeast Asia.
The cautious bidding by developers was most noticeable for the private housing sites, with 5 bids received for the Dairy Farm Road GLS site and 3 bids for the Jalan Jurong Kechil site, compared with a total of 9 bids for the Canberra Link EC site, says Tay Huey Ying, JLL head of research & consultancy, Singapore. She sees this as indicative of developers’ sentiment that demand for private homes will be more adversely affected than that for ECs. 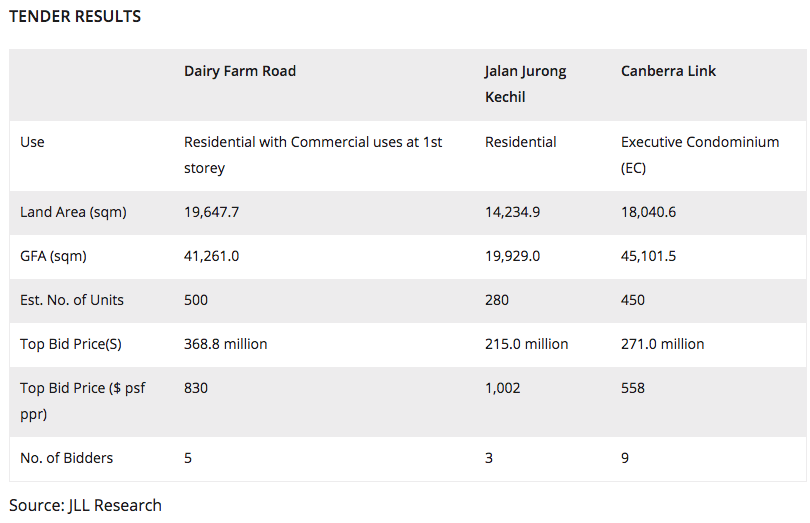 Dairy Farm Road site
The highest bid of $368.8 million came from United Engineers’ wholly-owned subsidiary UEDR Residential. The bid price translates to a land rate of $830 psf ppr, which is 22.2% lower than the $1,068 psf ppr paid by Hong Leong Group for the Hillview Rise GLS site in June, points out JLL’s Tay. It is near to the recent new launches, Mont Botanika Residence, which is a freehold boutique development acquired by Tuan Sing via En-bloc sale. Mont Botanika Residence showflat is located next to Hillview Community Centre.
Based on the land rate for the Dairy Farm site, it is estimated that the selling price for the new project to be in the range of $1,400 to $1,500 psf. The projected selling price for the Dairy Farm Road site is in line with the average transacted price of $1,437 psf recorded for the May 2018 launch of the second phase of Le Quest at Bukit Batok Street 41, according to JLL.
Jalan Jurong Kechil
The number of bids received was 3, a huge far cry from the 24 bids submitted for the nearby Toh Tuck Road GLS site in April 2017, which has since been launched as the 327-unit Daintree Residence. The highest bid of $215 million for the Jalan Jurong Kechil site was submitted by China Overseas Holding and CSC Land Group, says Nicholas Mak, ZACD executive director.
The bid price translates to a land rate of $1,002 psf ppr, and is considered “bullish” as it’s 6.7% higher than the price paid by S P Setia for the Toh Tuck Road site last year of $939 psf ppr, points out Mak. Based on the land rate of $1,002 psf ppr, the breakeven for the Jalan Jurong Kechil site is expected to be in the range of $1,640 to $1,700 psf, he notes.
Meanwhile, the selling price for Daintree Residence is an average of $1,702 psf, based on the 42 caveats captured by URA REALIS as of Sept 4, notes JLL’s Tay. Daintree Residence showflat is situated not far away from its actual site.
Mayfair Gardens, a London theme inspired new launch, brought to you by Oxley Holdings, will be opening its showflat from 15 Sept onwards. Accordingly to reliable source, a one bedder will start from $938k, at $1853 psf. Mayfair Gardens showflat is conveniently located next to King Albert Park MRT Station.
Once this project had been successfully launched, Oxley will be releasing another project, Mayfair Modern, right next to Mayfair Gardens.
Canberra Link
Although interest in the Canberra Link EC site remained healthy with 9 bidders, it pales in comparison to the 17 bids received for the last EC site at Sumang Walk that closed in February.
The top bid of $271 million for the Canberra Link site came from a joint venture between Hoi Hup Realty and Sunway Developments, and translates to a land rate of $558 psf ppr. This was just 4.3% lower than the $583 psf ppr paid by City Developments and TID for the Sumang Walk site, says JLL’s Tay. She reckons developers have taken into consideration the additional 5% non-remittable additional buyer’s stamp duty (ABSD) they have to pay for sites acquired after July 5.
Both private new launch condo are expected to be in the marketed 10 months from now. The EC new launch is expected to be in the market 15 months later.
Source: The Edge Property